You are here: Home › Project › Just counting heads!? Some considerations on how to measure gender diversity in research teams.

When it comes to gender statistics, some people might think: ‘Why all the fuss, you simply have to count the number of women and men, and that’s it.’ But is it? Does the overall number of women and men really capture the complexity of gender processes within a team? What if all the women were in senior position and all the men in junior position? Or if all women were to focus their work on research and gaining prestige for their results while all the men were caught up by administrative tasks and their work remained invisible? If we were only to focus on the sex of the team members, meaning on the overall number of women and men, we would miss such gendered processes.

What is gender diversity?

The first step in developing a composite indicator is to decide what is meant by gender diversity. Drawing on insights from both gender and diversity studies, we see gender as socially constructed and embedded in organisational processes. The social construction of gender is visible, for example, in the lower representation of women in senior roles within research teams. Furthermore, the gendered representation of who is (and implicitly who is not) an ‘ideal scientist’ is prevalent, and this from our youngest age. For instance, when children are asked to draw an engineer or scientist they typically depict them as men (as this video illustrates). Consequently, a woman engineer might be seen as out of place, questioned as to her motives for choosing this career, or met with incredulity as to whether she is a ‘real’ engineer – something which does not happen to men that often (Faulkner 2009).

Gender goes beyond the individual person. It also impacts on the way organisations work. Gender is something that comes into effect through social practices which establish – presumably natural – differences between two sexes (Ridgeway 2007). These practices also create unequal structures and processes in research: first the unequal distribution and access to resources and decision-making and second the different value that is culturally attributed to femininity and masculinity. To fully measure gender diversity, different articulations of gender processes within research teams need to be considered.

How to put gender diversity into a single measure?

Gender diversity is a multifaceted phenomenon but how to summarise this complexity within a single measure? Data on different aspects of gender diversity (e.g. women and men in senior position; or the number of women and men in different subject areas) are aggregated on the basis of their underlying conceptual and statistical structure. This process is briefly outlined below (for more see “The Gender Diversity Index, preliminary considerations and results”).

One of the first methodological considerations to decide upon is how gender equality is conceptualised. Taking a women’s empowerment perspective means that only gaps that are detrimental to women are considered (see for instance the Global Gender Gap Index). While we recognise the historical power imbalance between women and men and acknowledge the importance of women only initiatives in men dominated contexts, we argue that gender equality is achieved when all individuals are equally represented. Consequently, we consider any kind of gender gap as detrimental, regardless of whether it is women or men that are disadvantaged (a similar approach was taken on in the Gender Equality Index).

The next step is to decide what measures are needed. The representation of women and men needs to be captured, but also the extent to which representation changes at different levels such as for example glass ceiling effects. It could be that the overall proportion of women and men is close to parity, but that all men are at entry level. We therefore use two types of measures, one for representation, and another for attrition. The metrics are bound between 0 and 1 to ease interpretation and allow for aggregation into a composite indicator.

To measure representation, we use a metric that is bound between 0 and 1, where 1 is obtained when there is parity (exactly 50% of women and 50% of men). This is expressed mathematically as: 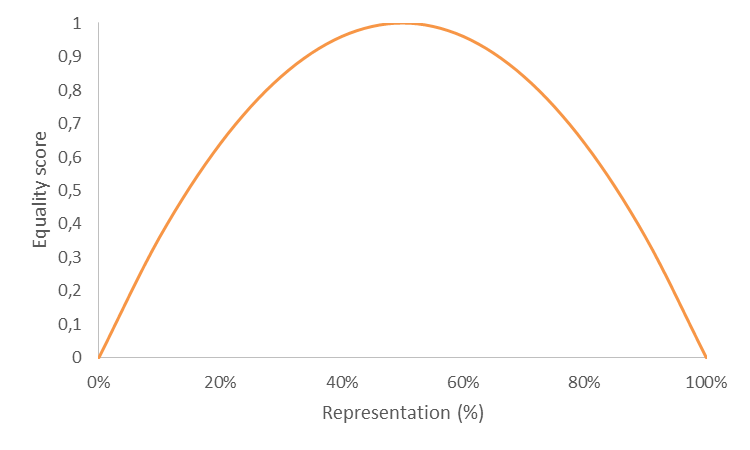 The second metric is a relative measure of attrition. Relative gender diversity metrics capture gender representation at different levels, as opposed to the metric that only measure gender representation on one level. The attrition measure can compare, for instance, the situation at senior level with the one at the levels below. With the attrition measure we are able to show, to use the popular metaphor, the extent to which the pipeline is leaking. This metric is designed to ensure that scores are also bound between 0 and 1. It provides information on attrition regardless of whether inequalities are on the side of women or men. It is expressed as:

with level 1 or 2, team i, in institution j at time t where w and m refer to individual observations x and proportions in the population of reference for women and men respectively.

Once the different measures are defined and calculated, they have to be aggregated into a single measure, the Gender Diversity Index. The aggregation of different metrics is done on the basis of a multivariate analysis (for details see D3.1). Thus far, a preliminary analysis has been conducted using data collected through case studies. These steps will be retraced and the results used to make final decisions for the methodology used to construct the Gender Diversity Index. These future steps include considering issues such as compensability or weighting methods.

What do we need the Gender Diversity Index for?

There are several applications of the Gender Diversity Index. First, the Gender Diversity Index will be used as a measure to empirically test whether greater gender diversity in teams (see illustration below), particularly in the context of STEM, is related to increased research performance. Through this measure, we hope to generate insights in what way gender diversity impacts research performance. Different performance measures will be considered, including publications and patents.

Illustration of contextual effects and the relationship between gender diversity and team performance.

In doing so, we consider not only the relationship between gender diversity in teams and research performance, but also potential mediators and moderators of that relationship, such as overall team processes or context specific indicators.

The Gender Diversity Index can also be used to create a self-assessment tool. This tool will allow research teams to obtain a score which can then be used to monitor progress over time and benchmark themselves against other teams.

Anne Laure Humbert, PhD, is a Senior Research Fellow at the Cranfield International Centre for Women Leaders at the School of Management at Cranfield University since July 2015. In the GEDII Project, she developes the Gender Diversity Index.